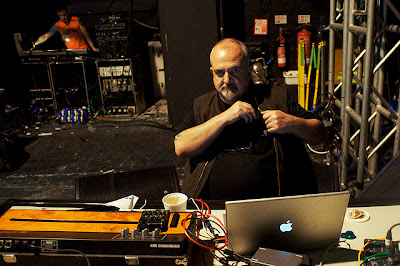 Early yesterday morning came sad news that one of the great pioneers in electronic music has died. Peter "Sleazy" Christopherson died in his sleep, at aged 55. As a founding member of Throbbing Gristle, he was part of one of the most experimental, influential and notorious British groups of all time. Considered to be the first industrial band, their music spanned styles from machine-like noise to pure electro-pop.

Formed in 1975, their performances (which included performing naked and vomiting onstage) inevitably created considerable controversy. At the time, British MP Nicholas Fairbairn famously gave the band their ultimate seal of hypocritical condemnation/approval when he pronounced the band "wreckers of civilisation" – shortly before he was arrested for indecent exposure himself.

Longtime friend and collaborator Chris Carter shared this fond remembrance of his friend:


Peter Christopherson, affectionately known as Sleazy, died peacefully in his sleep on the 24th of November at his home in Bangkok, Thailand.

The music and art world has lost a great talent whose unique approach ignored the conventions of the day and often challenged the status quo.


Sleazy's playful and inspiring creativity saw him pushing boundaries as a musician, video director and designer throughout his life. He had recently returned to Thailand from Europe, where he had played a short but spectacular series of live shows as a member of Throbbing Gristle and in the newly formed trio X-TG with Cosey Fanni Tutti and Chris Carter.


Sleazy's visual art career included work as a member of the influential British design agency Hipgnosis, creating iconic record sleeve artwork in the 1970s for Led Zeppelin and Pink Floyd and, later, Factory Records. He took the first promo photographs of the Sex Pistols, created a highly controversial window display for Malcolm McLaren and Vivienne Westwood's clothing shop, SEX, and went on to design the logo of the hugely popular fashion company, BOY. In 1976 Sleazy met Cosey Fanni Tutti, Chris Carter and Genesis P-Orridge and together they formed electronic music provocateurs Throbbing Gristle and Industrial Records, creating one of the first independent record labels of the era and laying the foundation for a new genre of music. The band was infamously described in the Daily Mail by Tory MP Nicholas Fairbairn as "the wreckers of civilisation".

TG ceased operations in 1981, after which Sleazy formed Psychic TV with Genesis P-Orridge and they produced two albums. The second, Dreams Less Sweet included his future life partner Jhonn Balance as a member, with whom he went on to form Coil and to release an extensive body of work up until Jhonn's passing in 2004. Subsequently, Sleazy left the UK to live in Bangkok, Thailand and to continue his artistic and musical vision in the guise of The Threshold HouseBoys Choir and Soisong.

Following their original break-up, Throbbing Gristle's legacy steadily grew within the music and art world, leading to their reformation in 2004 and a series of sold-out performances, including in Tate Modern's Turbine Hall.

At the time of his death, Sleazy was in the midst of assembling what was to be Throbbing Gristle's next project: a cover version of Nico's Desertshore album.

Peter was a kind and beautiful soul. No words can express how much he will be missed.

I can't say I am all that familiar with his, or Throbbing Gristle's, music, but the world is more impoverished without someone named Sleazy in it.