Skinny Ties and All 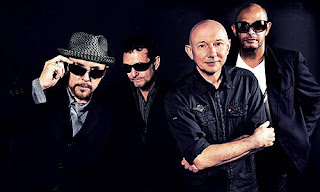 Thirty years ago every self respecting “Devoto-ee” knew every word to “The Light Pours Out of Me” and more than likely sported a Magazine button on their skinny tie...  Reunited Manchester post-punkers Magazine have released a new studio album this week so many years later via Wire-Sound. The band's fifth full-length, titled No Thyself, follows up 1981's Magic, Murder and the Weather, and was released in the UK October 24th.  (North American fans will have to wait until November 21st.)

No Thyself reunites band leader Howard Devoto, who formed the group in 1977 after leaving the Buzzcocks, with early collaborators John Doyle (drums) and Dave Formula (keyboards), as well as John White on bass and Apollo 440's Noko on guitar. Noko replaces guitarist John McGeoch, who passed away in 2004.

The band will also be heading out on a brief UK tour to promote the disc this November.