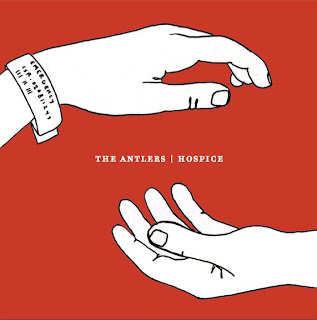 Another year of music has come and so the list making begins. Thus I compose my official Everything is Pop register of the top twenty five albums of 2009. My selections are based on carefully considered variables that range from subjective intuition, repetitive plays, creativity, favour and most importantly, originality.

I did not have a great deal of difficulty in preparing this list as it seems to begin to manifest itself in my psyche by early September. This year in song has been an exceptional one marked by a number of new discoveries and older stand-bys alike. Perhaps it was the transitional nature of the music industry this year that somehow inspired musicians of every genre to stretch creative, artistic and even marketing limits to entirely new heights. “Stellar” would be the term that seems to come to mind to summarize the year in song 2009. And with that statement, the list begins…

1. The Antlers – Hospice [French Kiss] No other record came close to affecting me as much as this Brooklyn trio’s deeply moving disc did this year. Originally conceived as a solo record by front man Peter Silberman this “concept album” about personal loss packs a powerful wallop even after numerous listens. Hospices songs are derived from Silberman’s personal stories that touch on mental illness, cancer and death. These are not easy listening by any stretch and yet their universal and soulful impact is what sets them apart from others this year. Yes this is heartbreaking (at times) and difficult but it also possesses a universal beauty that makes it unforgettable. A record that will stick with you long after it leaves the player.

Cass McCombs has always been a bit of an enigma for me and with this his fifth LP the artistic fog for this listener is beginning to lift. Catacombs is considered to be more accessible than previous efforts and I really must concur. This time out McCombs has delivered his most creatively consistent and artistically strong record yet. This is a fine release with a disposition that will please everyone. Definitely an artist to watch. Cass McCombs is only getting better.

Admittedly my first listen of Grizzly Bear’s 2009 release was a bit of a disappointment, despite the fact that a couple songs could be considered the best of their career. My second listening experience was a much better one due in large part to the fact that I was listening to the record on a full stereo system. It literally brought the music to life. Ear buds regretfully just do not do this record justice. (Akin to seeing a movie in a theatre and not a portable DVD player.)

Veckatimest is a remarkably fresh sounding record that provided an essential soundtrack to my summer music listening. It also represents marked growth for a band that seems to generate fan interest with every turn. Grizzly Bear are highly astute at achieving the right balance of mystery and melody within their song craft. Songs like “Two Weeks” and “Southern Point” underscore this ability. Both songs remain two of the catchiest songs I have heard this year.

When Dirty Projector’s appeared on the Late Show earlier this year it was as if the audience was hit with the business end of a garden hose at the end of their performance. Not that it was a poor presentation by any stretch of the imagination, but rather, the audience just didn’t know what to make of them. Their polyrhythmic song structures and jagged harmonies were very different from anything many in the crowd had heard before. The sound was quite foreign and entirely unique- the very qualities that forced me to explore this band in the first place. Dirty Projectors distinguish themselves this way and it makes their music unforgettable. There is no way you can confuse them with any other band and that is what I love about them.

This is definitely not music for the masses. Do understand though Bitte Orca is very much worth your time and exploration of this band will yield great results. Seek out their collaboration with David Byrne on Dark Was the Night that came out this year as well. Truly, one of the best songs they have ever done.

What self respecting blogger could not include this the latest LP release from Brooklyn’s Animal Collective? Yes, the hyperbole may be great but in this case it really is deserved. Like Radiohead, Animal Collective is one of the most important bands on the planet making music today. Merriweather Post Pavillion is a brilliant testimony to the greatness this band is capable of. Bold, focused and quite unlike anything else out there. Animal Collective continue to break the rules and garner new fans every time they do so. This is a brilliantly inventive release.

Bradford Cox is quickly establishing himself as the blogger generation’s Robert Pollard. Whereas the latter was heavily influenced by the music of The Who and the Beatles, Cox is more partial to the music and influence of Brian Wilson and Stereolab. The results on this latest endeavour partly a sweet slab of pure pop music and rocking freakout. In all likelihood this would not have emerged under the Deerhunter monicker which makes it an absolutely wonderful surprise. Again, this record distinguishes itself because it is so very different- Just not so different than the sweet pop at its core. Terrific.

7. Broadcast and the Focus Group – Investigate Witch Cults of the Radio Age (Warp)

For nearly a decade now I have enjoyed the fractured pop stylings of Broadcast. Their icy cool European exterior most enticing. I have always considered them to be a friendlier version of Portishead because of their extensive use of samples found sound audio snippets and unconventional instrumentation. This time out, Broadcast collaborate with the Focus Group to extend their intoxicating sound and indulge some new directions. The results are stunning with the latter providing skittering background accompaniment to great effect.

Favourite song – The Be Colony

A relatively new discovery that floored me from the first listen. Torontonian, Ray Cammaert has created something that is gorgeous and so very intoxicating. In what feels like familiar landscape the listener is drawn into Cammaert’s gauzy view and it couldn’t be more compelling. A special record that reveals new elements with every listen. If ever there was a recording that begs to be released on heavy weight vinyl, this would be it. A rare treat for the senses, this one is exceptional.

Experimental electronic artist Bibio may be responsible for the most pleasant musical surprise for me this year. Picking this one up on a whim based on the fact it was on The Warp Records imprint was one of the best new discoveries I would make this past summer. Ambivalence Avenue combines elements of electronica, and hip hop (with a folky twist); this one works in spite of its seemingly conflicting intentions. Bibio has created something unique and highly listenable.

Favourite song – Haikueseque (When She Laughs)

10. Bill Callahan - Sometimes I Wish We Were an Eagle (Drag City)

Sepia toned reflections on life and nature are a winning combination for the more than slightly winsome Callahan. His song, All Thoughts are Prey to Some Beast may be the most beautiful song of the year and is a definite career highlight. Richly imagistic with sublime instrumentation to match this one is a pure classic.

Favourite songs - All Thoughts are Prey to Some Beast, Faith Void

Great list. I need to get that Antlers album. "Two" and "Sylvia" are solid tracks.

An inspiring list and I am pleased to note there are a few selections I am not as familiar with (more new discoveries to fuel my musical addictions!)

I agree with you regarding The Antlers - one of the best of the year without question - these snapshots of human mortality and frailty are ultimately life affirming and paint a vivid picture of what defines the human condition. In a strange way the album is ultimately a hopeful experience for me, functioning as a more subtle and refined "carpe diem" type catalyst to live well, even the midst of apain and suffering .

Probably one of the best years in music in a long time - and I agree that there appears to be a reverse correlation between the decline of the traditional music industry and the creative outpouring of amazing music in it's wake.

Any thoughts on a best of the decade list? (a painstaking process to the say the least)

Velvet covers a growing antler and provides it with blood, supplying oxygen and nutrients

It's very telling that, despite the fact that we have very similar musical tastes, our lists will in fact be very different. It speaks to the sheer enormity of the amazing music that was released this year. Almost verging on overwhelming, I think.

Well done! This is a solid list all around. I'm beginning to think I need to check out Bill Callahan and Cass McCombs.

Sean, you're my friend, and I value that friendship, but I hope that 2010 brings some rock and roll back into your life.

Where is that "with Bob" Replacements fan?

What a great list! I completely agree with your number one pick, that album captivated me in a very real way. So many themes, as Matthew touched on in his comment.

A couple of choices on here almost made my list (Modest Mouse, Andrew Bird) but had to be cut as 25 is just not that big a number. ;) This year was such a rich year for music, we've been spoiled.

Happy Christmas Sean! Hope you and yours are enjoying the day. :)

Haven't heard all of these but your list is one of the best ones I have seen. Lost of diversity. Thanks for posting this.

Wow, the fact that I haven't heard even half of these albums really speaks to the fact that this really was an amazing year in music, and one that I'll probably be revisiting over 2010 and beyond. Thanks for the amazing list, and I can't believe I let the Antlers pass me by last year...