“Success has always been the worst of liars” 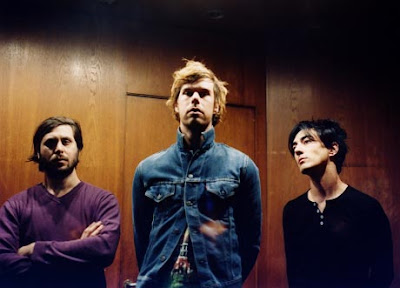 Friedrich Nietzsche never heard the music of this band but I remember the first time I heard the music of Liars. A preview track on Wire Magazine’s always fantastic Wiretapper Compilation opened a breathtaking, albeit noisy new world to me. As impressed as I was with this amazing debut, their next record, Drums Not Dead blew my mind. I wasn’t the only one and it provided considerable proof this band was a force to reckon with. Not surprising then, there has been considerable excitement building for the New York band’s forthcoming Sisterworld release. Scheduled for release in early 2010, the inscrutable trio have released three short videos (each accompanied by seemingly teaser snippets from the album.) Today the teasing ends and a more substantial offering is being made via the same website in the form of an free MP3, titled “Scissor.”


“Scissor” is set to be the first song on the new album, and if it is any indication, the band is set to explore some new and interesting musical territory. Could the sturm and drang be behind them? Replaced instead with ambience and fragility… I didn’ think so either. As always with Liars one must expect the unexpected. Who know what 'lies' in store for us in the coming months.

But for now, enjoy this free download.
Posted by Sean Wraight at 7:39 a.m.

I must admit, I wasn't really impressed with this track when I listened to it yesterday. I love Liars, but their music really needs to be listened to in full. Meaning single tracks sometimes do them justice.

I thought the softness of this track, then the 10 seconds of loud in the middle were just out of place.

That said, I am still looking forward to this release, as I think it will flow better with tracks to buttress it.

Liars weren't really much on my radar prior to their touring with Radiohead a couple of years ago. At which time they would have blown the roof off the place, had there been an actual roof.

It's good to see them stretching their musical wings a bit here.