The Winter of Mixed Drinks On the Way 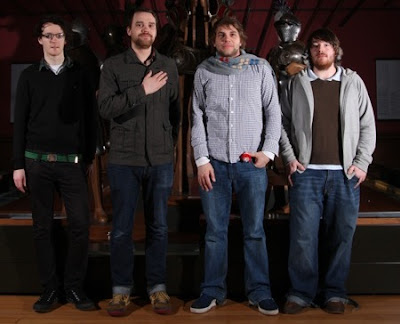 As if the first part of the 2010 new release calendar wasn’t all ready filled with high profile new music releases, Scotland’s Frightened Rabbit has returned, following 2008’s superb The Midnight Organ Fight, with plans to release its third full length record. Titled The Winter of Mixed Drinks early previews are indicating another knockout effort from these talented Scots.
From the Guardian Weekly Podcast


We’ve broadened our horizons sonically and it feels like a natural move forward,” explains lead singer Scott Hutchison. “Most importantly, it’s better than the last one. That’s all I wanted, really.” Again, as if that was even possible!”

The Winter of Mixed Drinks was produced by Peter Katis, at Tarquin Studios in Connecticut, and engineered by Stuart Hamilton at Castlesound Studios in Scotland. It also features a guest appearance from labelmate Hauschka, who provided the album’s string arrangements.The album is scheduled for release on March 1st in the U.K. (via FatCat Records).  A North American release date is still forthcoming. Until then, have a look (and listen) to the first single, “Swim Until You Can’t See Land”.

More Frightened Rabbit is always cause for celebration. In fact I think it calls for an Everything Scottish Night or something!